I nearly don't want to admit this: I've been using Windows 10 for years, and I thought that Microsoft had removed the classic "volume mixer" utility. Apparently, it's been there all along. What made me miss it is Microsoft's decision that "volume up" should go right and that "volume down" should go left - very odd.

However, if you use your keyboard's function keys to raise or lower the volume, a popup will appear in the upper left corner of your screen: going up increases the volume and down decreases it. The second screenshot shows how the volume popup looked in Windows 7. Nostalgia 😭. I literally went to another PC, took a screenshot, saved it to the server, copied the screenshot onto this PC, and pasted it in this tutorial. That's how much I care. In Windows 7, you had a "Mixer" link in the popup. It's gone from Windows 10, but you're about to see how to access it.

Instead of a regular click, right-click on the volume icon in your taskbar. A context menu will open. Select the "Open Volume mixer" option, and voilà. The Volume Mixer opens in all its glory, and it looks exactly the same as it did in Windows 7. (And that's a good thing: it's clean, intuitive, and predictable.)

The leftmost (vertical!) slider controls your PC's volume. The other sliders control the sound for individual programs. That's really useful if you like your PC sound at a certain level, but one app is too loud or too quiet. You've probably already experienced this: you raise your PC's volume to a high level, forget that you did, and fall off your chair the next time you get a system notification. 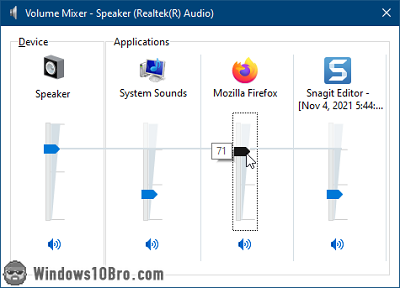 In the above screenshot, I'm leaving the volume as-is except for Firefox, the browser in which I am (let's say) playing a video or some background music.

Clicking on the speaker icon in the volume mixer mutes the sound for every app, but without changing the volume level anywhere. That's unlike the volume slider, where you have to change your volume all the way down to mute. Notice how the volume level is maintained for each app, your speakers, and Windows:

Tip: click once more on that same speaker icon to unmute all sounds.

The volume mixer is filled with "Easter eggs" (hidden tricks), for such a simple app. If you click on the Speaker box at the top, it will open Speaker Properties, where you can customize your speakers' advanced sound settings:

And if you click on the System Sounds icon, the volume mixer will open the Windows Sound popup. (That's the popup I used, for example, to show you how to re-enable the startup sound for your PC.) Isn't that neat?

Tip: you can also access the Sound popup by right-clicking on the speaker icon next to the clock and choosing "Sounds" from the context menu:

While I prefer the "classic" volume mixer, I want to show you that Windows 10 does include a replacement. Right-click on the speaker icon in the taskbar (next to the system clock) and choose "Open sound settings" from the menu.

This will open the Settings app with the "Sound" screen preloaded. At the very bottom of that screen, click on the button below "Advanced sound options":

The "App volume and device preferences" screen that loads should look familiar. It replicates most of the classic volume-mixer's functionality. It doesn't match the beauty, but it's there if you like configuring Windows from the Settings app: 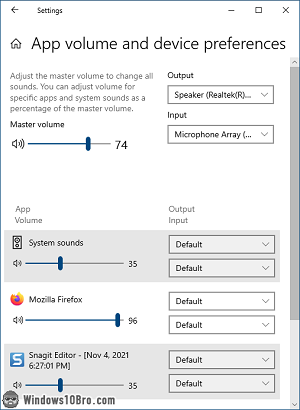 Rant: some of Windows 10's design motifs make me think of "brutalist architecture". You just pray that you'll wake up in a better world.