Windows supports access-key shortcuts, awesome for commands without a keyboard shortcut. (A keyboard shortcut is something like Ctrl+S.) Below is a TextPad command I use often, but not often enough to merit its own keyboard shortcut. (There's a limited number of those.) To cut bookmarked lines, I just hit the sequence of underlined letters, and it automatically goes through menus for me. No need to click-click-click on commands deeply nested in submenus:

Microsoft hides accelerator keys by default, probably to avoid confusing non-advanced users. But if you press the Alt key on your keyboard, Windows will highlight all access keys available in the current window. Here's the same app, before and after hitting the Alt key. All menu headers are underlined:

This is both a productivity feature and an "accessibility" feature. If someone has mobility challenges that prevents them from (easily) using a mouse, they have a fallback mechanism with keyboard shortcuts and access keys.

FYI: when programming a Windows app, just adding an ampersand before a letter transforms that letter into an access-key shortcut. Example: typing the File menu-header as "&File" sets F as its access key. Typing a menu item as "Save &As" makes A its access key. So, hitting Alt+F on your keyboard and then pressing A triggers the "Save As" command: 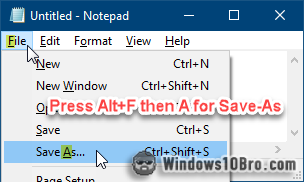 That will open the Settings app. Near the bottom, under "Change how keyboard shortcuts work", check the "Underline access keys when available" toggle:

Now open a classic Windows program like Notepad, which includes a traditional menu. Notice that all accelerator keys are underlined by default: 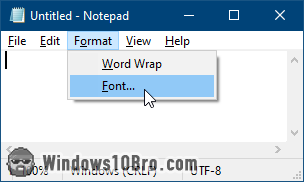 There are some apps that behave in non-standard ways. Office apps are an example (ironically, since they're also made by Microsoft). Here's the Excel ribbon after hitting the Alt key. Just hit the highlighted letter (or number) to trigger the corresponding action. For example, N would select the Insert tab:

Note: when Windows says "Underline access keys when available", the last two words probably refer to cases like apps in the Office suite. Since standard access keys don't exist, they're not highlighted in (say) Excel.

Access keys in context menus and other "interface controls" 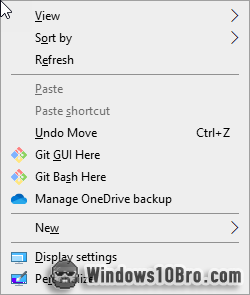 The underline-shortcuts setting will also affect "context menus" (those that appear when you right-click on something). The screenshot shows the menu that opens when I right-click on an empty area of my desktop. Yours will look slightly different depending on the apps installed.

But this setting will also highlight "interface controls", a fancy name for all the other things that you see in Windows apps and popups. That includes buttons, dropdown menus, text boxes, etc. Fun-game time, locate all the underlines:

Just like with menus, pressing the Alt key and the underlined letter will trigger the "action". This can be clicking on a button, focusing on a text box or dropdown, selecting a tab, opening a submenu, checking a checkbox or radio button, etc.

No Alt required? In some cases, like in the screenshot below, you don't need to hold down the Alt key first. If you just hit the underlined letter, Windows will interpret it as you doing the action. In the confirmation dialog below, hitting N does the same thing as clicking "No":

This tutorial will probably get very few views. People "advanced" enough to know about access keys will figure out themselves how to underline them. Others won't know it exists. If you're reading this, consider spreading the word about accelerator keys. It's a huge time-saver I wish more people knew about.

Tip: if arrived on this page looking for a way to make File Explorer stop underlining filenames and folder names, see this tutorial instead.