The taskbar is arguably the most important tool in Windows. By default, it's always visible on your screen, shows all programs currently running, and gives you the date and time. It also gives you one-click access to the second most important tool - the start menu. If you look at the Windows 95 taskbar, (nearly 30 years old), it hasn't changed much. But it has since been refined quite a bit: 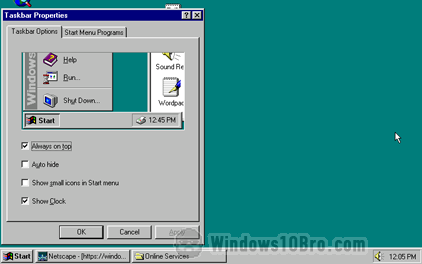 Most of the taskbar's functionality is non-obvious

Some of the innovations thrown-in over time include the ability to show/hide tray icons, centralizing all notifications in a single place, a scrollbar when too many programs are running. You can also "pin" apps you use all the time (so that their icon stays on the taskbar even after you close the app) - etc., etc.

Tip: programs pinned to the taskbar automatically receive a keyboard shortcut. To launch (or activate) the leftmost pinned app, hold down the

key and press the number 1. Hit

+2 for the second pinned app, and so on. Use the

Microsoft added the "Action Center" to the taskbar. It's a practical, on-demand pane that centralizes notifications as well as common actions. You can show the Action Center by hitting the

+A keyboard shortcut or by clicking on its icon in the bottom right corner of the screen (by default). It's a square callout:

Discover how to make the taskbar your own

Learning how to customize your taskbar will probably bring a ton of micro-productivity boosts to your days and make using Windows even more pleasant. Many repetitive tasks can be simplified once you know a few tricks. You just learned one in the previous tip: I know that my backup software is pinned in third place, so I never have to hunt for it - I just hit

I've also set my security icons to always show in the system tray / notification area of the taskbar so that I immediately know if there's an issue:

FYI: the big question mark icon in my taskbar is not an app or a system tray icon - it's a taskbar "toolbar", namely HP's Support Assistant utility.