Windows does this on touch-enabled devices. It's called "menu drop alignment", and it's designed to prevent the hand of right-handed people from hiding menus. If you're left-handed (or if, like me, you're right-handed but don't use your laptop's touch-screen), you can make Windows display menus on the right.

Technical note: desktop-apps developers can choose to follow Windows' right-handed / left-handed setting in displaying menus. They often ignore them if they know that their program won't typically be used in tablet mode. As example, here's my trusty TextPad making an executive decision: 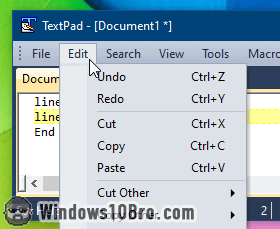 Show menus on the right side

To change the direction of menus, click on the start button (Windows logo), and type "handed". Click on the result labeled "Choose whether you are right or left handed". This opens the "Pen & Windows Ink" page in Settings, filled with touch-related options:

In the dropdown labeled "Choose which hand you write with" dropdown, select "Left Hand". It feels odd if you're right-handed (Microsoft forces us to LIE), but that's the only way to make Windows show menus on the right for all apps (not just desktop apps who ignore that setting).

The change takes effect immediately: you can close the Settings window.

Apps detect your Windows settings when they launch, so you'll need to restart the programs whose menus show up on the left. I just restarted Snagit (pictured in the second screenshot), and it now shows menus on the "right" side 😎

Because Windows knows about changes you make to its settings in real time, you don't need to reboot it to apply the new setting. Here's me again, right-clicking on my desktop with a satisfied grin and renewed sense of hope:

In case you don't see the right-handed / left-handed option

If your version of Windows 10 didn't show this option in the Pen & Windows Ink page, here's another approach. Earlier versions of Windows had a "Tablet PC Settings" popup. It's hidden in Windows 10, but can still be accessed.

First, open the "Run dialog": hold down the

key on your keyboard and press the letter R. This will open a popup like this (with or without prefilled text): 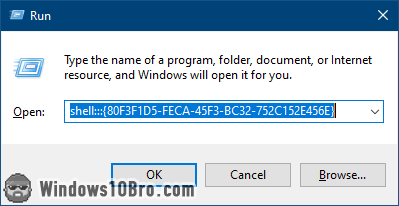 Caution: only run commands like the one above when they're suggested by a website you trust. Typically, a website that was featured in search results from Google or Bing (for example) should be safe. The easiest way to check is to see if other sites suggest the same solution: if so, you know it's legit.

Once you hit Enter, the popup shown below will open. Click on the "Other" tab at the top, and select the option labeled "Left-handed - Menus appear to the right of your hand". Click on OK to save your change. If you relaunch a program that was showing its menus on the left, they'll now appear on the right. 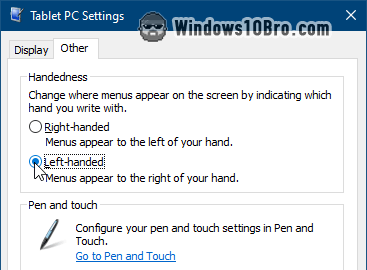 Note: behind-the-scenes, Windows keeps track of menu alignment in the registry. To change the alignment to the right, just enter zero as the value for the MenuDropAlignment key. It's located under HKEY_CURRENT_USER / SOFTWARE / Microsoft / Windows NT / CurrentVersion / Windows. To align the menus back to the left side, reset that key's value to a 1. 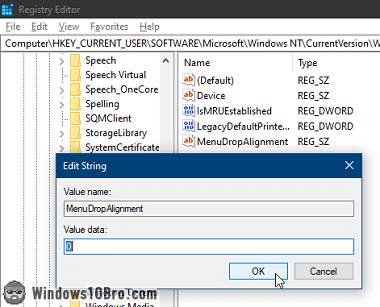