Make a program launch maximized or minimized - with shortcuts

In Windows 10 (and earlier), there are five window states: maximized (where the app window takes the entire screen, minus the taskbar at the bottom); minimized (the program is running, but hidden in the taskbar). "Normal" is the state when the window is not minimized but not maximized either, like the window in the screenshot. The last two states, full-screen and hidden, don't apply in this tutorial.

Some programs "remember" their last state. The next time you launch them, they automatically redraw their window to the size and position they had before they were last closed. Notepad does that, and restores the last state:

I'll show you how to override that last state, using shortcut properties.

Technical FYI: you can think of shortcuts as a one-click set of instructions for Windows. That single "lnk" shortcut file contains the path to the target app, parameters, window state, permissions, etc. You could do most of that with the command line / batch files / WSH, but it would be very tedious.

There are more shortcuts than you think

Unless you had fun exploring Windows' innards, you probably don't realize that pinned programs in your taskbar are actually shortcuts. Don't believe me? Navigate to this folder in File Explorer (Windows Explorer). Just replace the text "UserName" in the path below with your actual Windows username:
C:\Users\UserName\AppData\Roaming\Microsoft\Internet Explorer\Quick Launch\User Pinned\TaskBar

Note: an old version of Windows, called "XP", had a feature called Quick Launch, boxed in red in the screenshot. This no longer exists (no longer used), but the location and name stayed the same for legacy reasons.

Likewise, your start menu is just a big collection of shortcuts. Even more fun, it gets its shortcuts from two separate folders. The folder for your profile, and the folder for "all users" (start-menu shortcuts visible to all users on your PC).

FYI - you can see in which folder some shortcuts are stored by right-clicking on them, choosing "More", and selecting "Open file location":

But why bore you with this? Because what this means is that you can also customize the launch-state of any program in your taskbar and start menu.

To edit a shortcut's settings, right-click on it and choose "Properties". You can generally tell that an icon is a shortcut because it shows an arrow (see screenshot: the arrow isn't part of the icon). Windows doesn't show any arrow on shortcuts in the taskbar and start menu (unless you look at them in Explorer).

In the Properties popup, make sure that the Shortcut tab is selected at the top. Then, pick "Maximized" or "Minimized" from the Run dropdown:

Click OK to apply. The next time this program runs, it will launch in that state.

Tip: there are some exceptions. For example, some program cannot be maximized (they only run in one window size). If that's the case, changing the Run state won't work - but it won't hurt anything either.

Change the window state of a start-menu shortcut

Remember: your start-menu shortcuts are split between two folders. You can edit shortcuts in your own folder. But, to edit shared shortcuts (those visible by all users on your PC), you'll need "elevated privileges". In other words, you'll need to know the administrator's password to edit those shortcuts: 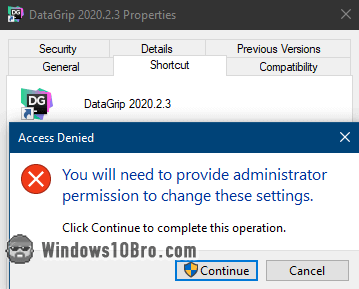 The path to your own start-menu folder is:
%appdata%\Microsoft\Windows\Start Menu

The path to the shared (all users) start-menu folder is:
%programdata%\Microsoft\Windows\Start Menu

Note: a "path" is special text that lets Windows know where to find a file or a folder. You now understand why Windows doesn't let you use special path characters like % and \ in the names of your files.

To view the content of one of these folders, start by copying its path. Then, open the "Run dialog". You do that by holding down the

key on your keyboard and then hitting the letter R. Now paste the path you copied and hit Enter: 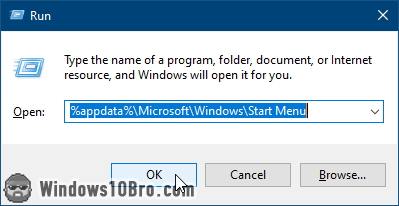 The folder will open in Explorer. Find the program you want. Right-click on it (its shortcut) and choose "Properties". Then, select Maximized or Minimized from the Run dropdown. Note that you're not making any changes to the target program: you're only modifying the behavior of this particular shortcut. 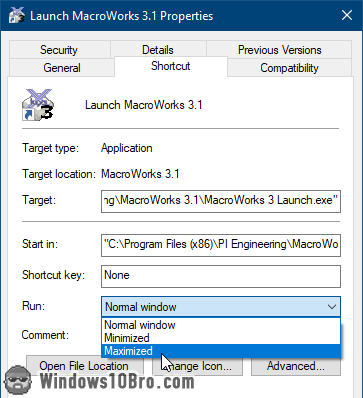 Click OK to save. If you were editing a shared shortcut, you'll be asked to enter the administrator's password. You can double-click on the shortcut to test it. The next time you click it in the start menu, it will open in that new Run state.

Change the window state of a taskbar shortcut

Right-clicking on a taskbar button just shows its jump list. Not what we want:

To access that shortcut's properties, close all that program's windows (if any). Then, hold down the Shift key on your keyboard and right-click on the taskbar button. This time, the shortcut menu will open. Choose "Properties":

And just like before, make sure that the "Shortcut" tab is selected at the top. Then, choose one of the three window states under the Run dropdown:

Before you click OK to save, check out the extra credits below.

Extra credit: assign a hotkey to a shortcut

If you click inside the "Shortcut key" text field and press a keyboard shortcut, the target program will open whenever you hit that hotkey. Make sure you pick a shortcut that doesn't conflict with a keyboard shortcuts. Assigning Ctrl+Alt shortcuts should be safe because these modifier keys are rarely used together. For example, I have Ctrl+Alt+Z mapped to my all-purpose text editor: 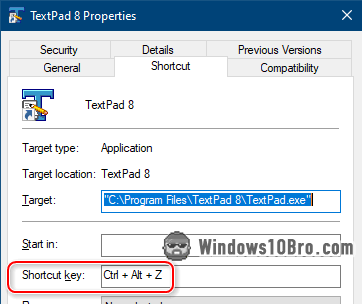 Extra credit: assign a custom icon to a shortcut

To assign a custom icon to any shortcut, including those in the taskbar or start menu, go through that same shortcut Properties popup. Just click on the Change Icon button. When the Change Icon popup opens, click Browse to select an icon file (ICO). You can also select a program (EXE file), because most programs contain icons embedded into them, as do DLL files (more on that in a later tutorial). Once you're happy, click on both OK buttons to save the change:

Congrats on reading this far: you're a rock star.