Your PC ships with a default time zone, not related to where you live. I live in Texas (Central time), but my PC was set to Pacific time: maybe because it's an HP, which is headquartered in California? Or maybe because Microsoft is headquartered in Washington state? I was super-happy about my productivity the first time I saw the clock, thinking I had accomplished a lot - until I realized that it was two hours behind 😭. I'll show you how to change your time zone, automatically sync the clock, and how to make sure that Daylight Saving Time is turned on.

In earlier versions of Windows, you could just click on the system clock to view more details and change its settings. That's gone from Windows 10: instead, you need to right-click on the clock, and choose "Adjust date/time" from the menu.

Under "Time zone", pick your desired time zone from the dropdown menu: 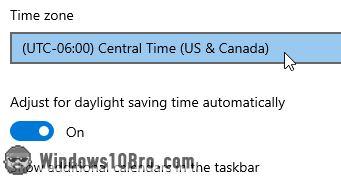 Technical note: you can still access the old applet to customize the system clock, the one used by default in Windows 7 and earlier. To do so, just type the "timedate.cpl" command in the Run dialog or the start menu. To mess with time zones from the command line, look into tzutil.

By default, the "Adjust for daylight saving time" toggle is checked. This means that Windows automatically adjusts the time twice a year. No need to remember to do it manually, you can trust that your Windows clock is always accurate.

FYI: Windows "remembers" the current date and time even after you've turned and even unplugged your PC. That's because computers contain a battery-powered clock. If you ever plug-in a PC that's been unplugged for a long time, and whose internal clock battery has depleted, it has lost track of time, and thinks that we are in 1970 (the default system time).

Synchronize your PC's date and time

Windows tells you at the top of this screen the last time (pun?) it synced its clock with a "time server" on the internet. Time servers are computers whose only job is to accurately keep track of time. (They use an atomic clock, the most precise way we found to measure elapsed time: how it works is ingenious.)

To force Windows 10 to update its date and time, you can click on the Sync now button. (You need to supply the administrator's password to do that, and you need to have an internet connection.) A checkmark will appear on success:

Tip: if your laptop / tablet has a GPS chip, and if you have location services enabled, Windows may automatically update your device's time zone based on your current location. If that's the case, Windows will show you a notification confirming this change, so you're not taken off-guard. That can be useful while traveling, as long as you realize that it's happening!

This will open the Date and Time popup, which lets you add up to two new time zones. Check one of the "Show this clock" checkboxes to add a new time zone: select a time zone from the dropdown menu, and give your clock a name. 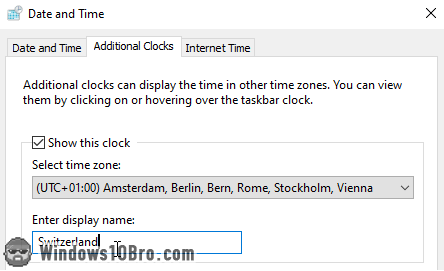 Tip: if you're not sure, check-out this Wikipedia page for a full list of time zones, broken down by country. Most countries only have one time zone.

It looks like nothing has changed, but don't worry: click on the system clock, and you'll see your new time zones listed at the top, below the current time. Windows helpfully tells you when one of those zones is on a different day. It's about noon here in Texas, but Windows tells me that it's already tomorrow in New Zealand.

You now know more about time zones in Windows 10 than you cared to. You can safely close the Settings window, anything changes you made will be saved.

Note: you can also view all time zones by hovering your cursor over the system clock. A tooltip will appear, and display up to three dates/times: