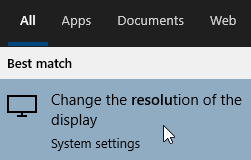 There are two ways to change your screen resolution: right-click on an empty area of your desktop, and choose "Display settings" in the menu. You can also click on the start button and type "screen resolution". Then, click on "Change the resolution of the display".

Windows will open the Display screen in the Settings app. At the top, you'll see a section called "Rearrange your display". It shows all the monitors that Windows has detected as being connected to your computer. In my case, I have three external monitors connected to a laptop. Each screen is assigned a number: 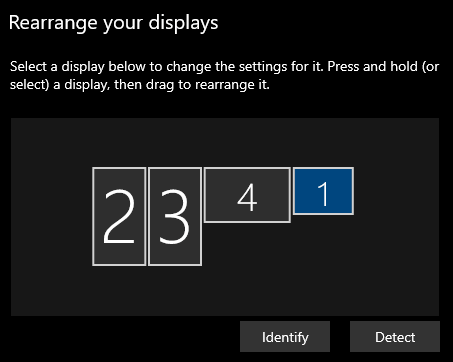 Click on the monitor whose screen resolution you want to change. If you only have one monitor, it will be automatically selected. If you have multiple monitors, and you're not sure which monitor is which, click on the Identify button: Windows will display a big number on each of your screens: 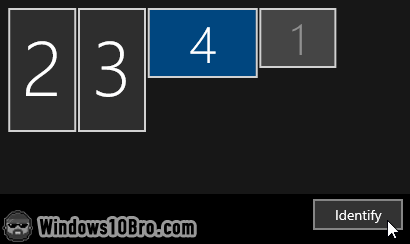 Tip: in this options screen, you can click and drag around your monitors so they appear in the same position as the real world. In my case, monitor "2" is on the left of monitor "3", so I positioned them like that. This position also affects how your mouse will travel from one monitor to the next. (Note: you cannot control the numbers Windows assigns to monitors.)

Once a screen is selected, scroll down to the section labeled "Scale and layout". The first dropdown is often set between 100% and 125%. This controls how Windows 10 "blows up" things like fonts, scrollbars, close buttons, etc. This is not the same as screen resolution: it just magnifies some other elements: 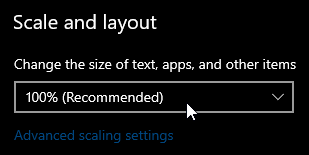 The dropdown you want is the one called "Display resolution". If you click on it, it will show all the resolutions that your monitor supports. The current one is the highlighted one; the one that says "recommended" is the native resolution of your monitor. You don't have to use that resolution; in fact, with many monitors, this will make things look way to small for comfort.

There are two numbers in a screen resolution: the first one tells you how many horizontal pixels it shows, and the second, how many vertical pixels it displays.

FYI: how wide your monitor is compared to how high it is a proportion we call "the aspect ratio". And while Windows will list all the screen resolutions that your monitor supports, some of them may not be the right aspect ratio. You'll be able to tell right away, because what you see will look "squeezed". That's ok, just try out a different resolution!

Unfortunately, Windows doesn't tell you with which aspect ratio each screen resolution corresponds (your monitor's proportional width and height). So, here's a list to help you. Find your current screen resolution below: any resolution next to it will work for your display.

You will quickly be able to tell if your aspect ratio is off, because everything will look distorted (squeezed vertically or horizontally).

If you like the new resolution, click Keep changes to apply it. If you don't like it, or if things look weird, click on the Revert button. Doing nothing does the same as clicking Revert, but after waiting 15 seconds (Windows' safety mechanism!)