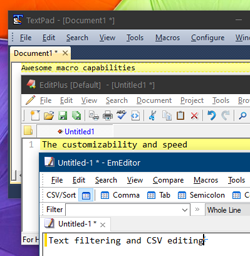 Programs / apps / applications (I use these interchangeably) are a big reason why Windows has maintained its market position. You might like other platforms, sure. But if they don't have good alternatives for your daily apps, you won't switch. I know because I've considered myself several times switching to macOS or Linux.

Note: your top-10 pinned apps are a good indication of the apps that matter to you. First, because you pinned them first (assuming you pinned them). Second, because anyone who knows the following keyboard shortcut will pin its favorite apps first. You can launch (or activate) the leftmost pinned app by holding down the

key and pressing 1. You hit

+2 for the second app, etc. The tenth app is activated with

Which apps will be covered?

This site focuses on Windows 10, but I'll cover apps as they relate to Windows itself. I plan on covering Windows Mail, for example. It's the email program that comes bundled with Windows 10. It's not Windows 10, but it's part of it. Same reasoning with utilities like the Snipping Tool - it's part of the OS.